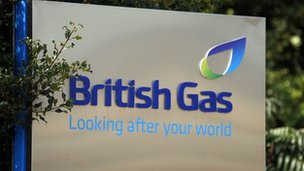 British Gas says there are cheaper ways to save on bills

British Gas has been criticised for lobbying to reduce plans for insulating some of the UK’s coldest homes.

The firm persuaded ministers to lower their ambition by two-thirds after it failed to meet existing mandatory targets for solid-wall insulation.

Rival firms say British Gas’s lobbying has put up to 10,000 jobs at risk and may jeopardise the fledgling solid-wall insulation industry.

But BG said there were cheaper ways to save on bills and cut carbon emissions.

The work is expensive and labour-intensive, but it cuts £400 to £500 from a home energy bill and is a guaranteed way of permanently reducing costs for consumers.

The insulation was due to be carried out by energy firms under the ECO scheme, which imposes a levy of around £50 on the average household bill.

Some firms created large teams of home insulators and were on schedule to complete the work on time. But British Gas insulated only one in six of the solid-walled homes it was supposed to.

It also said the costs of carrying out the energy-saving scheme were much higher than estimates from its rivals.

A memo seen by BBC News from an official in the government energy department DECC said: “The reality is that BG have inflated their estimates of costs and this can be shown when comparing to others. They have been blaming increases in costs on government consistently, when this is not true.”

Two rival energy firms have told BBC News that they wanted the solid wall target to be shifted to the general taxation budget, but wanted the ambition to be retained at its current level.

Neither is prepared to spark an industry row by publicly criticising British Gas, but a source at one said: “We were aware that British Gas was constantly in Downing Street trying to get the targets lowered. We were never invited to Downing Street to put our case.

“British Gas has succeeded in getting the rules of the games changed at half-time – and it means that people will continue living in cold homes.”

Tony Cocker, chief executive of E.On, told the Times: “We are disappointed that a decision has been taken proposing a very low level of solid wall insulation.”

Another industry source pointed out the Old Etonian link between Mr Cameron and Sam Laidlaw of Centrica.

Yet another complained that British Gas had benefited doubly from the changes, because it never paid the costs of training and equipping an workforce to carry out the insulations adequately and now doesn’t face the task of finding other work for its team, or making them redundant.

“They just got away with it,” he said.

I understand that some firms will be trying to negotiate compensation from the government for the change in policy.

Chris Weston from British Gas told the Times he was very happy that the solid-wall target had been changed.

He said the number of solid-walled homes it would need to insulate by 2017 would fall from 87,000 to 32,000, but he denied that he had supported lowering the target because cold homes would mean more sales of gas.

“That’s the last thing that enters our mind,” he said. “We think it’s a good think to help our customers use less gas and electricity.”

The government’s advisory body, the Committee on Climate Change, has also been calling into question the cost-effectiveness of solid wall insulation at this time.

Guy Newey, from the right-leaning think-tank Policy Exchange, told BBC News it was right to reduce the solid wall target.

He said: “It’s a relatively expensive way of cutting carbon emissions and saving on bills and it makes sense for the government to prioritise for cheaper ways of achieving its goals like insulation cavity walls and lofts, and installing new boilers.”

Professor Jim Watson, head of the UK energy research Centre UKERC, said: “Solid wall insulation is expensive, but the UK’s housing stock is among the worst in Europe and we are going to have to tackle this issue if we are to hold down bills and meet our carbon emissions targets.”

The young owner of a large semi-detached home in St Helens visited by BBC News spent £22,000 to insulate her house fully, including the solid walls. But half the cost was paid by a grant from the ECO scheme.

“I am very, very grateful,” she said. “There’s no way we could have afforded this on our own. It’s going to reduce our heating bills by more than £400 a year and the house is going to be so much nicer to live in.”

The work was carried out by Jerry Izard of Solus Energy, who said: “It seems to me that if we are going to tackle climate change, a very good way is to improve the efficiency of the old housing stock by reducing the amount of energy people use. It’s not a good idea to save on people’s energy bills by cutting a scheme that saves people’s energy bills.”

By adding more insulation to your home, you not only save dollars each month on your utility bills, but you will be able to keep your home more comfortable throughout the year.

Save time and money and let the utility companies pay for some of the insulation upgrades in your home. Adding more insulation will help you save money by lowering your utility bills and make your home more comfortable.